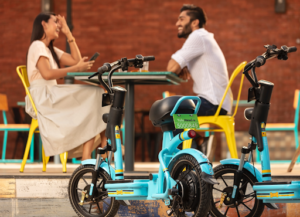 For someone commuting in cities like Bengaluru, Mumbai, or Delhi it is hard to not notice those blue-colored bikes and cycles neatly parked in stands at various places. Yulu – that’s the name of the company that provides rental bicycles/ e-bike on a pay-per-use basis.

Yulu was founded in 2017, in the technology hub of India, Bengaluru. With a focus on reducing traffic in heavily congested cities, the company allowed users to just walk up to any Yulu stand, scan the QR code, pay money online, use the vehicle, and park it to a nearby stand when done. Yulu successfully managed to leverage technology to solve a pertinent problem in growing Indian cities. Yulu has also launched Yulu electric bikes to encourage and boost the EV economy in India.

Yulu Move is a regular bicycle that you can use as an alternative for shorter commutes (or even longer distances if you are up for it). All the bicycles come with a smart lock feature which can be controlled through the Yulu app. You can head over to Yulu zones in the city as seen on the Yulu app, pick up the cycles, and eventually drop them at any convenient Yulu zone.

Yulu Move is a super-affordable offering, costing as low as INR 10 for the first 30 minutes (and INR 5 for the subsequent ones). It is thus a more practical option not only for last-mile commute in crowded cities but also for purchasing a new bicycle altogether.

Aiming to be an early entrant in the Indian EV market, Yulu added the electric bike – Miracle – to its portfolio in 2018. It is a lightweight 2-wheeler with a top speed of 25 kmph, which also eliminates the need to have a license or helmet to ride it.

Operating in a similar fashion as the Move, you can rent the Miracle at any available Yulu Zone. These come with swappable batteries and are continuously monitored by the Yulu team for replacements

Dex is the latest addition to Yulu’s offerings, designed specifically for people involved in the delivery of couriers, food items, groceries, etc. It can carry up to 50 kg of load and has a riding range of up to 50 km.

Yulu aims to reduce the delivery costs for the gig workers by around 30-40%. The bike can be taken to nearby Yulu swapping stations to replace low-charge batteries with charged ones. The company is in process of establishing such stations in cities like Mumbai, Delhi, and Bangalore.

Yulu has also recently tied up with the Mumbai corporation to set up Yulu zones in BKC, which is a major corporate park. Leading two-wheeler Indian company – Bajaj Auto – has an 18 percent stake in the company and Yulu is leveraging Bajaj Auto’s facility to assemble the China-imported parts for its bikes. It aims to manufacture Yulu Electric Bikes there itself in the future.

Yulu is taking the right steps for providing environment-friendly and sustainable commute options to the country. In all its offerings, Yulu has definitely been successful in identifying the pain points of the customers and leveraging technology to solve these problems sustainably. It has set some right examples for other players in the Indian market.