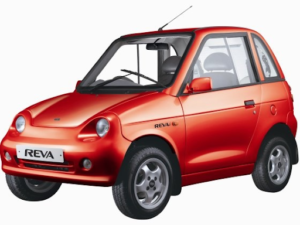 Reva – an eccentric-looking compact electric car that created the perfect buzz in the Indian market. The Reva car is often termed the first electric car in India. The car was quick to gain popularity due to its unconventional design and the positioning of being affordable and eco-friendly.

Here is a trip down the memory lane to revisit this iconic electric car.

Reva, which stands for Revolutionary Electric Vehicle Alternative, was a product of the Reva Electric Car Company (RECC). Chetan Maini founded RECC in 1994 in a joint venture with a US-based company (AEVT Inc.). To provide an efficient and compact electric car, Reva was finally introduced in 2001 in the Indian Market.

Launched in India for INR 2.5 lakhs, Reva potentially had a running cost of INR 40 paisa per km. It could reach a top speed of 65 km per hour and covered up to 80 km in a single charge.

It took around 2.5 hours to charge Reva from 0 to 80% and around 6 hours for complete charging. The lead-acid battery had a 3-4 year lifespan to cover around 40,000 km and the battery could be replaced post that for an additional cost. The battery could be charged using the regular sockets present in households.

The seating capacity was practically for 2 passengers including the driver, with some compact space at the back.

Reva was certainly a news-maker when it finally hit the roads. The Reva Electric Car Company managed to sell around 4500 units of Reva worldwide from 2001 to 2011. It earned positive sentiment for being compact, affordable, and of course, eco-friendly. Post its India launch, Reva car was launched in the UK in 2003, in London in 2004, and several other countries.

However, many months after the global launch, sales started to decline. Lack of government policies, low perceived benefits, compromised performance as compared to newer cars, and many other such reasons contributed to a drop in Reva’s popularity.  Eventually, in 2010, Indian Conglomerate Mahindra and Mahindra purchased a 55% stake in RECC. RECC was renamed as Mahindra Reva Electric Vehicles Private Limited and later rebranded as Mahindra Electric Mobility Ltd. in 2016.

Irrespective of its success or failure, the Reva car remains one of the most iconic cars in the Indian market. Of course, the car might not seem impressive today with the advancement in technology, but back in 2001, this was a powerful first step towards an eco-friendly and fossil-fuel-free future. It brought about a revolution in the electric car segment and showcased the use of innovation for a positive environmental impact. Reva is surely a legendary vehicle in the history of Indian automobiles. It is also, after all, the first electric car we know!